Using the word ‘essential’ in the title of a blog that lists episodes of a now defunct US Reality show centered around a foul-mouthed British chef shouting at lesser chefs, is a bold move. But, to write a blog about Gordon Ramsey – who could be described as bold man – you need to be bold.

Shall I say bold one more time? Yes. Bold.

The British series was a lot more, well, British. It looked at the issues of alcoholism within the restaurant industry and running a restaurant in a country where most people cook at home. That’s all well and good, but gets honestly boring as shit – the only thing that stood out was that Gordon Ramsay is excellent at shouting at people and gave everyone a really useful clip on YouTube on how to carve a chicken correctly (seriously, it’s so good).

The American series is honestly the worst best TV show in the history of world.

Here’s my expert opinion. Yes expert opinion, I’ve watched each episode like 5 times AND Sir Gordon Ramsey tweeted me once and it was the best moment of my life. 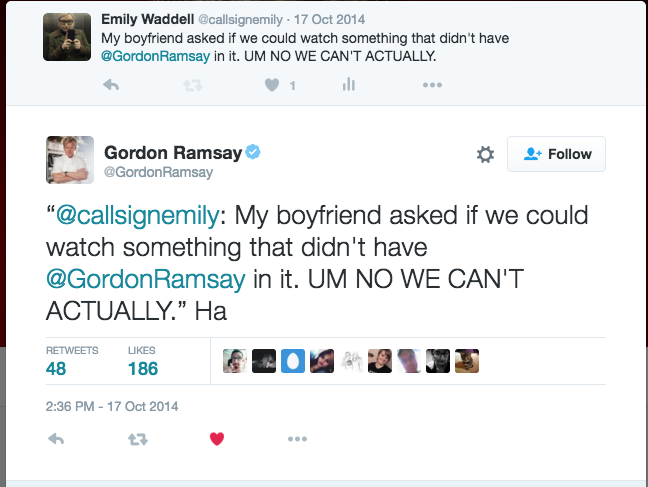 So here are the five essential episodes you need to see before you leave this mortal coil.

Burger Kitchen is one of the few two-part episodes featured on Kitchen Nightmare’s, which stands as a testament to what a giant shitshow it is.

Alan and his wife Jen have opened a burger restaurant in a popular area of LA; everything should be going great right? Wrong. What’s odd about this episode is that Alan very openly admits to using his son Daniel’s inheritance from his grandfather, Alan’s dad, to open the restaurant without Daniel’s permission. Alan also thinks that there’s a conspiracy against the restaurant organized by Yelp. The head chef David Blaine (seriously) also accuses Jen of being on Prozac constantly and ends up getting fired in the middle of service for threatening Daniel. Oh and Daniel’s girlfriend wears really stupid hats all the time.

It’s a classic and should be watched every Christmas as a new family tradition.

Gordon’s visit to Dillons is only the second episode of the very first series of Kitchen Nightmares. A testament to the awesomeness that is this episode. An Indian/American/Italian every type of cuisine restaurant located in New York it features some excellent Kitchen Nightmares tropes:

Nino’s Italian restaurant is a fantastic example of another Kitchen Nightmare’s trope – the chef/owner who just lies about everything. Nino the owner of the restaurant chooses an odd lie though. Rather than saying the food is fresh or that all the recipes are delicious, which are the standard lies restaurant owners tell to Ramsey, he says his main job at the restaurant is cleaning.

He says he cleans. All the time. He actually gives Gordon pictures he got someone to take of him cleaning.

It’s fucking mad, as you’ll see because the restaurant is absolutely filthy. I love it, an excellent introduction into the batshit crazy world of restaurant owners.

Another gem from Season 1, the promotional advert that came before this episode was just Gordon screaming at the owner “YOU FUCKING FLITHY FRENCH PIG” – so either it was a good episode with an arrogant French owner or this is the episode where Gordon reveals he just fucking hates French people. I think it’s a little of both.

Things to watch out for:

OBVIOUSLY. If you didn’t know anything about Kitchen Nightmare’s you still might have heard about the infamous Amy’s Baking Company. A restaurant with such insane owners that Gordon actually left half way through the show and the owners then took to Facebook to contest their representation on their show. You can check out the Buzzfeed article here and their Know Your Meme page here.

BUT before you check out the aftermath, you need to watch this episode. Most Kitchen Nightmare episodes have a typical format: Gordon meets owners, Gordon eats food, tells them food is shit, finds out chef is shit/owner is mad/kitchen is gross and then he fixes it all. However, in Amy’s Baking Company the kitchen is clean, the cakes are delicious and the owners only seem slightly bad – so what gives? The disastrous dinner service involves firing, threats, screaming, bad food and Gordon at the end of the episode saying he can’t do anything for them. OH GOD IT’S SO GREAT.

Think I’ve missed any? Tweet me at @callsignemily – come on, Gordon Ramsey follows me, are you better than him? NO OBVIOUSLY NOT.