Why does Marvin Rees hate strippers?

On International Women’s Day 2016 Marvin Rees, Labour’s mayoral candidate in the upcoming election, announced that he would do two things for women in Bristol.

Two policies, which seem a bit at odds with other. The first one wants to stop the systematic of discrimination against all women when it comes to the pay gap. The second one want’s to make women jobless. Closing down strip clubs will negatively the main people who profit from such establishments. So, obviously, that’ll be the women who work in them.

According to Martin, strip clubs are a “real concern” and pondered if Sexual Entertainment Venues (SEV’s) “feed into wider inequalities that are faced by women”. He concluded by talking to nobody and asking “Is the price paid by wider Bristol very, very high for this?”

I don’t know if you picked up on it, but I was being heavily sarcastic in the previous paragraph.

It’s also pretty well known that Marvin Rees is a pretty socially conservative Labour MP, he even wrote to Bristol Churches asking them to write a manifesto about what they thought “a good Bristol looks like”. Something out of step with a modern Bristol, where under half of the population self identifies as Christian. So perhaps he’s basing on his good Christian moral compass instead of actual data.

When Marvin Rees announced this policy, there was backlash. Which is pretty great because I imagine a few years ago this type of policy may have slipped under the radar.

Esme Worrell whose been a stripper for 8 years in Bristol spoke to Radio Bristol and called Marvin Rees attempt to ban SEV’s as “patronizing” and said that if nobody should be policing consenting adults sexual behavior.

Tuesday Laveau, a stripper/burlesque dancer wrote an op-ed for Bristol 24/7 titled ‘Sex Work is Work’ where she stated “Firstly, I do not believe Mr Rees consulted with any dancers currently working in Bristol’s strip clubs or sexual entertainment venues. If he did, he would find grown women with agency, foresight and a knowledge of what field of work is most suited, convenient and advantageous for them. He would very quickly find that the assessment of strip clubs, as exclusively a place of exploitation would be incorrect.”

Two women who actually work in the industry have managed to cover the main points of why banning SEV’s is dumb as fuck.

So by now you may be thinking, okay so I’ve heard from the people who work in SEV’s and they’ve made great points. Surely, this is a feminist issue as well. Aren’t Bristol Feminist organisations helping make these naturally unheard women heard by a wider audience?

Well, you’d be exactly like me a few weeks ago when I submitted a question to the Bristol Women’s Voice mayoral hustings, as I couldn’t attend. I was pretty bummed when I looked at the hashtag and realised that the majority of Bristol feminist groups like Bristol Women’s Voice and the Bristol Fawcett Society are anti-sex work and were delighted at the idea of women loosing their jobs. 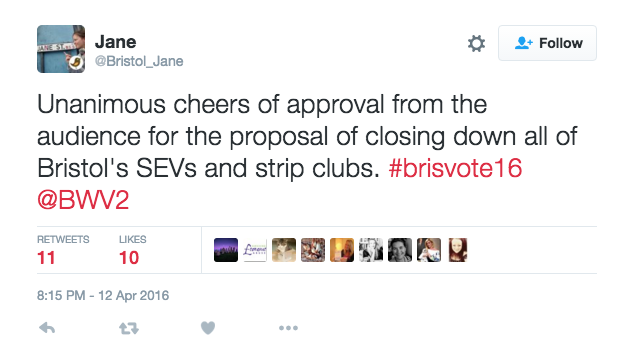 If you truly believe that women are exploited if they work at strip clubs, then I’d invite you to work for a few hours at a call centre or bar for minimum wage and I’ll ask you after if you felt exploited – should we ban shitty jobs too?

Vote with your feet and don’t vote for Marvin Rees. Because if he bases one policy on no data, no information from the people it affects and only does it to get headlines from women whose feminism is stuck in the 1970’s with Germaine Greer – then chances are he’ll be a crappy politician.

I’m not a sex worker and I’ve never been one, and with most things like this, we should listen to the people who work in the industry instead of drawing our own conclusions.